Written by Gerry Farrell on October 22, 2015. Posted in Culture Updates

Ahead of this year’s Bram Stoker festival we thought we’d look at the darker side of our fair city and dig into the most famous ghosts stories of Dublin.

Any city that’s been around over a thousand years is going to have its fair share of ghost stories and Dublin is no different. In fact considering Dublin has ample cause to claim to be one of the great centres of Gothic literature, having been home to writers like Charles Maturin, Lafcadio Hearn, Sheridan Le Fanu and of course the daddy of Dracula himself, Bram Stoker it’s no surprise we like stories of the ghouslish, strange or macabre. Below we’ve listed some of our dark and scary favourites, stories of ghosts, murders most foul and even Satanic worship. 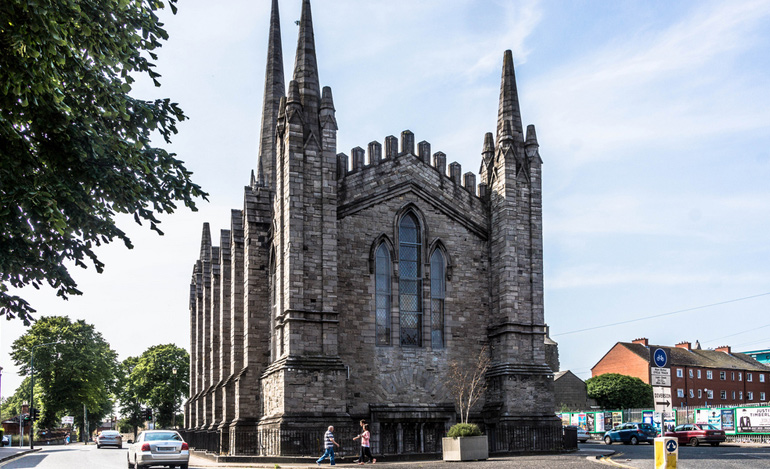 These days the the imposing, dark limestone building in Broadstone houses offices but up until 1962 St. Mary’s was a Chapel of ease for the local north Dublin protestant community. Due to the darkness of the stone the building became better known as the “Black Church” and various myths arose about the building. The most common one being that if you ran around the building three times and then entered the Church and went to the altar you would see the Devil. Although in true Dublin tradition different variations of the required actions emerged including walking around the Church in reverse 13 times or having to recite the “Our Father” backwards! 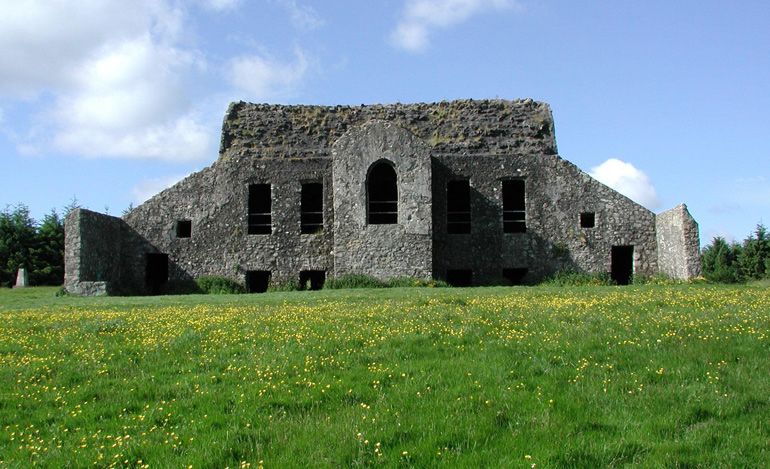 For years the legend of Darkey Kelly was that she was burnt at the stake in 1746 for the crime of witchcraft, her only real crime was falling foul of the Sheriff of Dublin Simon Luttrell, known by his title Earl of Carhampton, who had fathered her child.  It was alleged that Kelly had threatened to out the Earl as a member of the infamous “Hellfire Club” (more of which later) and that it was this threat that lead to her execution.  However later research has shown that it was not dabbling in black magic that did for Dorcas “Darkey” Kelly but the fact that she appears to have been a serial killer.
Dorcas Kelly was a brothel keeper in the area close to Christchurch Cathedral, indeed a pub on Fishamble Street still bears her name to this day. She was being investigated in relation to the death of a local shoemaker named John Dowling and the during the course of searching her brothel the remains of five other murdered men were discovered. Kelly was tried and convicted of murder and she was executed in a brutal fashion (part hanged and then burnt alive) on Baggot Street in the year 1761. 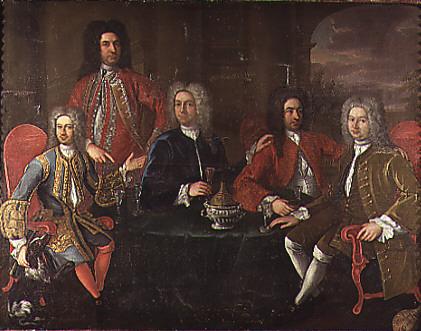 Futher to the ghoulish story of Darkey Kelly’s death stories have often been told of the appearance of her ghost in the grounds of the nearby St. Audeon’s Church off High Street. She is said to be dressed all in green, a colour often associated with death in Irish myth. 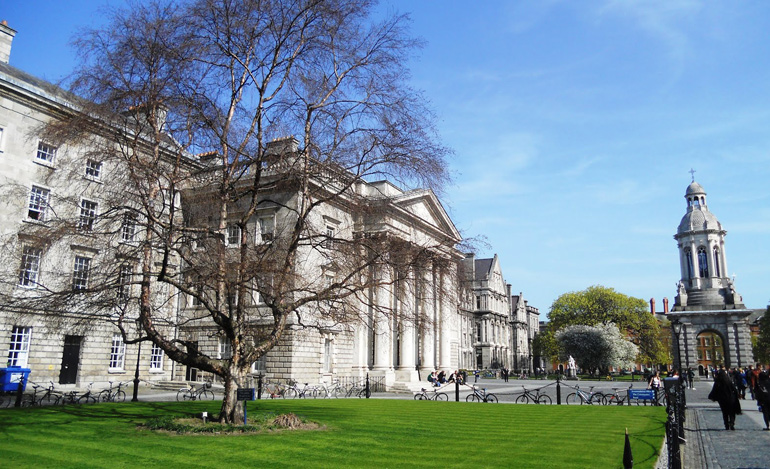 Trinity College has its share of ghoulish connections, many of the august University’s students would go on to write their own tales of  dark and unexpected, Oscar Wilde’s The Canterville Ghost and of course Bram Stoker’s Dracula spring to mind but there was plenty of real-life gore and ghoulishness to contend with.

As a centre for medical study Trinity’s medical school still sees its fair share of dead bodies but while the cadavers donated to medical science today are treated with courtesy and respect the bodies used by medical students in the 19th Century suffered a less dignified fate. Upon construction of the Berkeley Library in the late 1990’s the remains of dozens of bodies were discovered. It was theorised that these were bodies, sourced ilicitly through grave robbers and body-snatchers by medical students as part of their medical training, quickly dissected and buried under the cloak of darkness.

It is not known if any of these individuals haunt the College but one man who reportedly does is former lecturer Edward Ford. In 1734 the somewhat ill-tempered academic was sparked to anger by a group of rowdy Trinity Students throwing stones at his windows in the Rubrics building of the campus (the fine red brick buildings at east end of the main square). Mr. Ford did not take this sort of hijink well and decide to disperse the rambunctious students by firing a pistol at them. The drunken group quickly scattered but sought revenge for being shot at, they returned to their rooms, grabbed their own firearms and returned to the Rubrics building to teach Edward Ford, Fellow of Trinity College a lesson and fired a shot through his window.

Although the intention was not to kill that was the effect, Ford had been shot although he could not name his assailant, his last words were said to have been a reply regarding the identity of the shooter with Ford saying magnanimously “I do not know, but God forgive them, I do.”

No successful charges were ever brought against any student for the shooting of Ford but it is said that a forlorn individual in powdered wig and Georgian attire can be seen wandering the Rubrics building at night and that it is none other than Ford’s ghost that wanders the halls.

The Ghost of the Poet Mangan 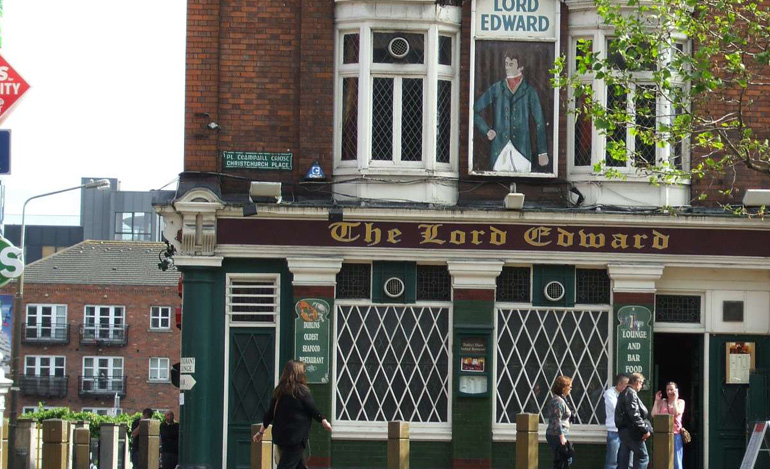 The Lord Edward pub and restaurant sit close to Christchurch Cathedral and are named after the famous Lord Edward Fitzgerald the Duke of Leinster who built Leinster House. It was in this building that the poet and scholar James Clarence Mangan was born. Mangan was fluent in a number of languages and became noted for his translations of European and Middles Eastern works to English and also for the quality of his own original poetry. Years later Mangan would admired by the likes of James Joyce and W.B. Yeats and was a friend and comtempory of Thomas Davis whose statue stands on College Green today.

Mangan himself is commemorated with a statue bust in St. Stephen’s Green but his emphemeral, ghostly presence is said to favour returning to the site of his birth and appear in the Lord Edward Tavern. 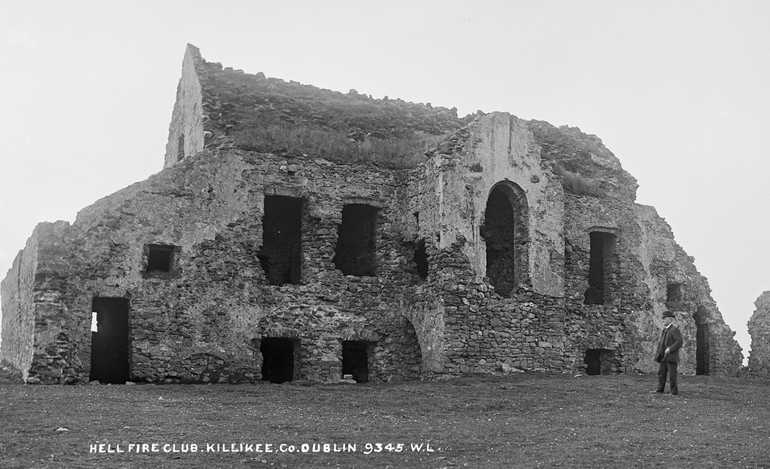 The original Hellfire club had been formed in London in 1719 but was banned within two years by the King of England, George I. The edicts of the King did not however prevent a Hellfire club emerging for the wealthy young gentlemen of Dublin as a place where they could, drink, gamble, hire prostitutes, torture animals and even do a bit of Satan worshipping. One of the founders of the club was Richard Parsons, 1st Earl of Rosse who was also the first Grandmaster of the Freemasons in Dublin. In fact Parsons’ home was on Molesworth Street where the main Dublin Masonic Lodge has operated since 1869.

Parsons and many of the wealthy young gents or “Bucks” as they called themselves would meet in taverns and Inns around the city to enjoy their debauches and among their number was the Sheriff of Dublin Simon Luttrell who we met earlier in relation to the execution of Darkey Kelly. Luttrell was known by various nicknames and titles including “the King of Hell” and was said to have sold his soul to the Devil in order to escape crippling debts.

The club members moved their many of their meetings into the foothills of the Dublin mountains, specifically the former hunting lodge of William Conolly, (Speaker of the Irish House of Commons and one of Ireland’s richest men) , on Montpelier Hill which took on the name of the Hellfire Club. It was reported that on building the hunting lodge Conolly had used the stones of a former ancient cairn and passage grave which further added to the ghoulish attraction for the club members.

Top Picks: Where to Dine over the Easter Weekend