10 Outdoor Spots to Enjoy a Pint in Dublin City

When we get a bit of good weather around Dublin Town we all feel the need to roll up the shirt sleeves, get a table in the sun and post a photo of a chilled pint or an ice-cream sundae online to convince our mates that we’re making the most of the “fine weather” because we never know when we’ll get it again.

The only question then is, where to go? We’ve picked some of our personal favourite beer gardens and seating areas based on everything from the seats, the atmosphere, the architecture, ambience and even the view of the Big Screen. In fairness, most of them have canopies, heaters and even blankets as well! Let us know where your personal favourites are to soak up the rays or the atmosphere. 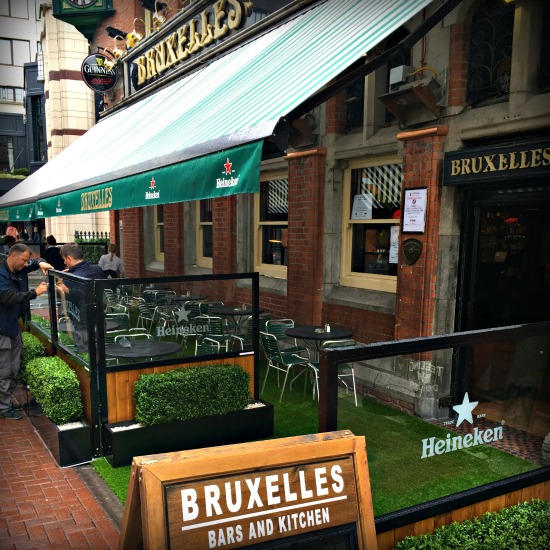 A popular spot with Dubliners and tourists alike Bruxelles is a great spot for a bit of al Fresco dining with a view out onto Grafton Street and right next to the Rocker himself, Phil Lynott.

Sams has a cool sheltered area that peers out onto the Georgian splendour of Dawson Street, sure you can give the Lord Mayor a wave over in the Mansion House, and also features an upside down hanging garden for you to enjoy. 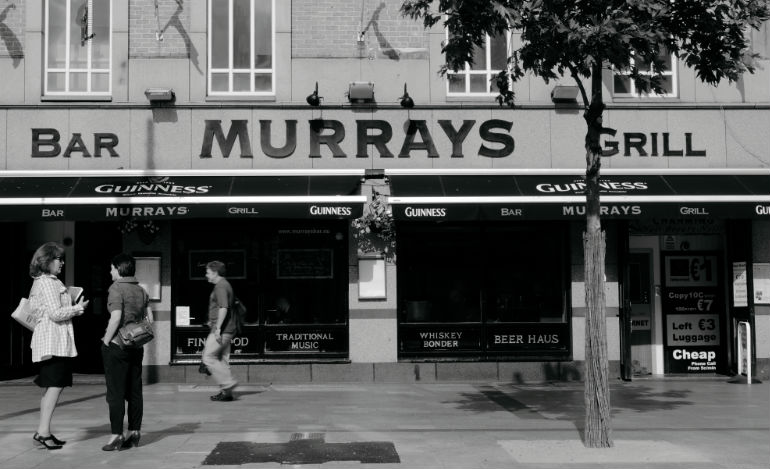 Murray’s proudly proclaims that it has “The Biggest Heated Beer Garden in Dublin” and although we haven’t been out with the measuring tape we don’t doubt them. A great spot to watch a match and you don’t have to worry if the sun goes in and you haven’t brought a jacket. 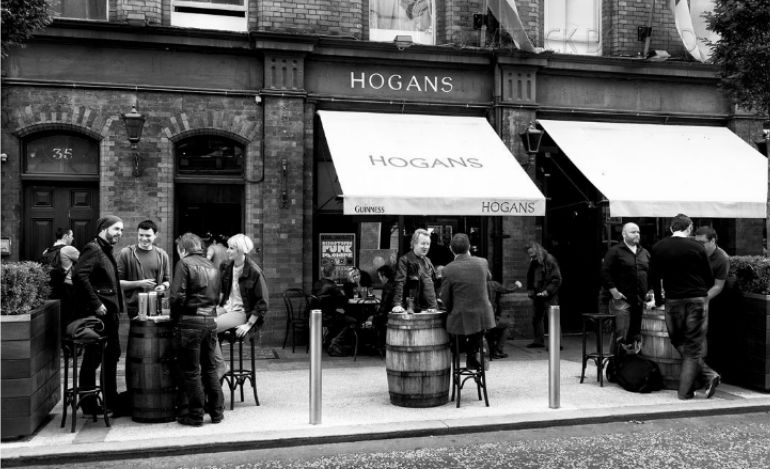 Over the last few years Fade Street has really come alive, there’s great places to eat like l’Gueleton and Fade Street Social and with the great restaurants has come great places to sit and people watch. A personal favourite is the narrow corner with South Great George’s Street at Hogan’s. During the day you can watch passers-by stop to buy flowers at the corner while in the evening you can watch the city gear up for the night out from one the little tables or wall-mounted benches. 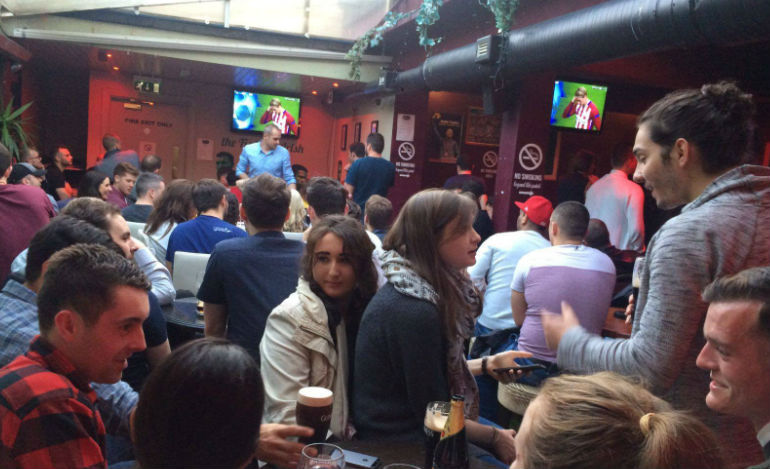 Just off O’Connell Street the pub formerly known as the Parnell Mooney has been restored to the height of its 19th Century glory. One thing that the Victorian Dublin wouldn’t have had available to them however, is the pub’s rooftop terrace and smoking area. Dubbed Captain Moonlight’s Rooftop Bar & Grill you can enjoy a few drinks under the stars and on Fridays they even prepare an ‘After Work BBQ’. 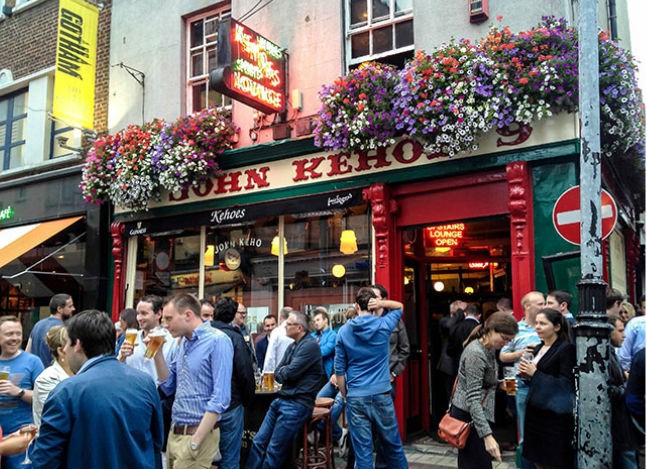 Originally first licenced back in 1803, Kehoe’s is a traditional Irish pub with a great atmosphere. Join the crowd out the front on a sunny day after work for a pint. Head down there around 5 o’clock on a Friday you’ll see what we mean. 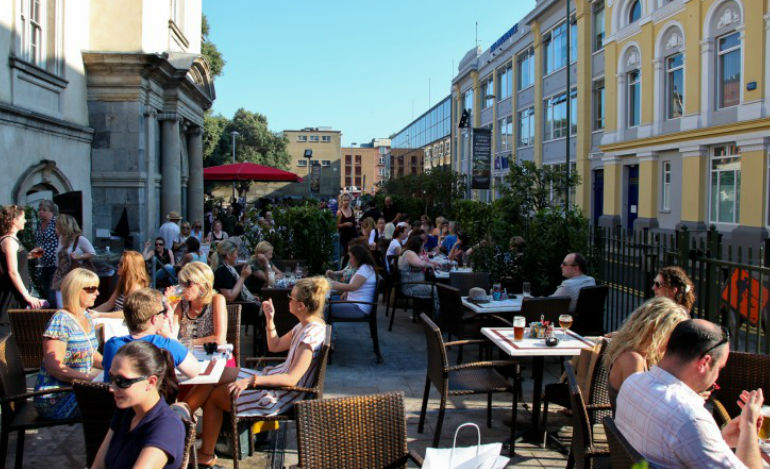 Right beside Wolfe Tone Square the Church is a sun trap on a fine day and they’ve been known to cook a mean burger on the big BBQ grill outside. A great spot to sit on a summer evening. 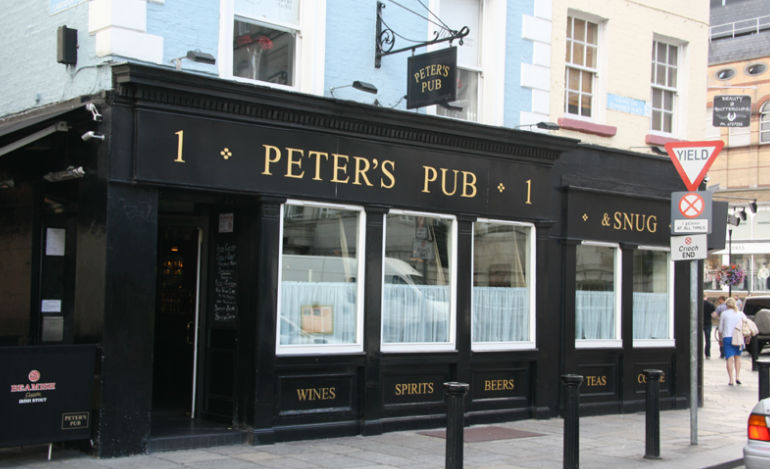 Peter’s Pub is one of the great traditional bars of the city and they have a charming seating area out on the path at Clarendon Market, the small street lit up by the fairy lights that runs down the side of the pub. They do a great range of craft beers and whiskeys and are rightly famous for their sandwiches. 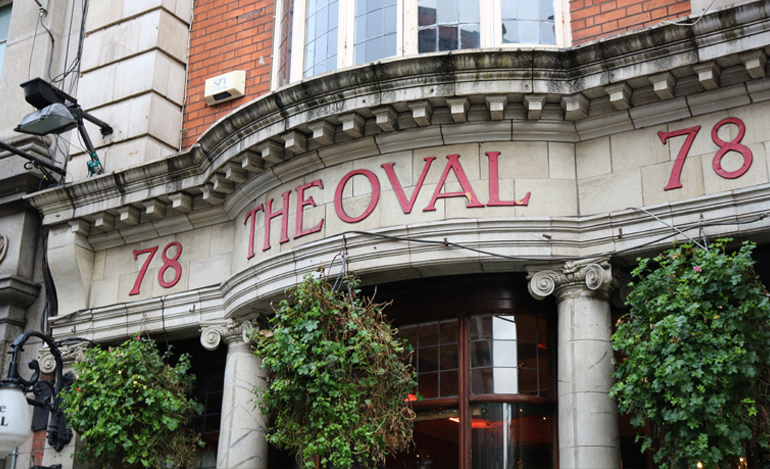 This famous Dublin pub was reduced to rubble during the 1916 Rising but was rebuilt in 1922 and features an attractive seating area in front of the ornate curved window of the front bar. Only a few yards from the hustle and bustle of O’Connell Street it’s a great spot for people watching or just enjoying a spot of lunch.

Anne’s Lane backs onto a number of quality nightspots including the likes of Cafe en Seine, Sam’s, Zozimus and 37 Dawson Street. It’s a vibrant destination in it’s own right, located just off South Anne Street. 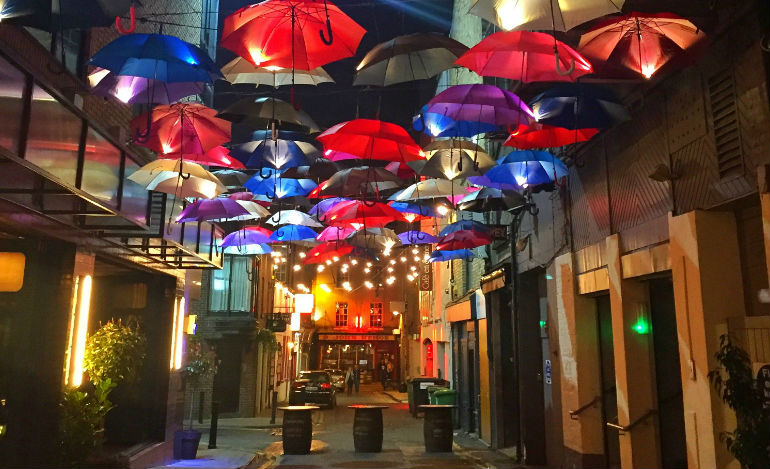 Other spots deserving of a notable mention: Fade Street Social, The Bailey, Noname, Pygmalion and Grogans!