Share the love this Valentine’s day & TweetHeart to win prizes

To kick start Dine in Dublin 2015 and to celebrate the international day of luuuurve, aka Valentine’s day, DublinTown has bring you the “Dine in Dublin Tweethearts” campaign. It offers you the chance to win dinner for two in Alex Contemporary Irish Restaurant and a stay in the luxurious 5 star Conrad hotel. If that doesn’t ignite the fires of love then nothing will!

But that’s not all. There is a second prize that consists of dinner for two in any of the participating restaurants during Dine in Dublin week. Foody fireworks are guaranteed!

In order to win one of these fabulous prizes we’re asking you to stretch your romantic writing chops and profess your love via Twitter.

Just tweet us using #TweetHeart #DineinDublin with a message for your loved one and the most romantic message will win! The soppier and more lovey, dovey the better.

Here is an example of a #TweetHeart 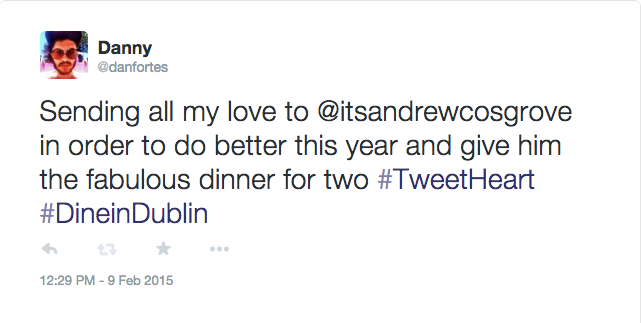 You can be more romantic then I was…

The festival’s culinary cupid will reward the most romantic couple in DublinTown on February 12th, just in time to start slapping on the fake tan and aftershave.

Ginzeng Opens in The Ilac Centre