One of the things we value here at DublinTown is that there are so many businesses around the city where the person behind the counter bears the same name as appears above the door. One such location is Reynolds’ Newsagents on Lower Abbey Street, right across the road from Wynn’s Hotel and the Abbey Luas stop.

Behind the counter most days is a member of the Reynolds family, and the newsagents stocks all the usual, sweets, newspapers, cigarettes and the like there is plenty more that is a little more unusual that catches ones eye as you cross the threshold.

It is at once both a throwback to newsagents of old, selling pipes and tobacco from Peterson’s for example, while also being completely unlike most other smaller stores in the city. Where else would you see huge, burnished 18th century bronze plates of William Shakespeare on the wall above the till? Or collections of African art and ceremonial masks for sale next to the sweet counter? They stock flowers and plants but far more than just the usual apologetic bouquet of roses, you’ll find cacti and succulents, tulips and peonies. 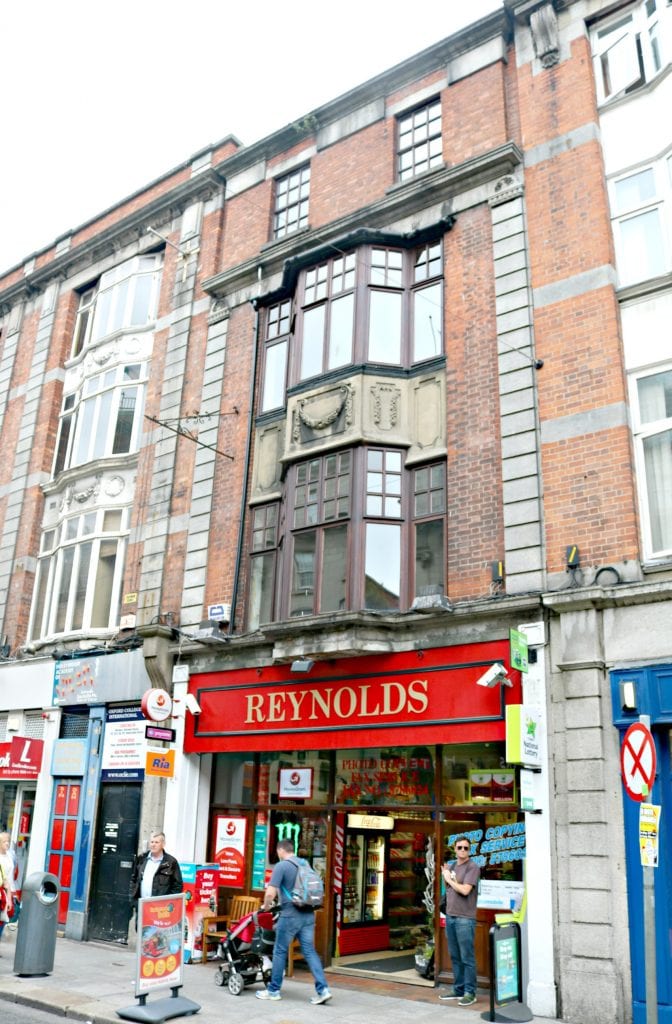 The owners’ pride themselves on the eclectic nature of the store and feel it suits the area and its history. Why not have a huge bronze plate of the Bard when you’re just a stone’s throw from the National theatre? The shop has been regularly frequented by actors and writers on their way to the Abbey, or on occasion some of the more well-known pubs in the area so it makes sense to try and reinforce the literary connection a bit.

The shop has had its fair share of famous patrons over the years, many with a literary or artistic connection, Brendan Behan was a regular during the 1960’s, while Alan Rickman was known to call in during the filming of Michael Collins. More recently film director Steven Soderbergh spent a few days behind the shop counter when scouting locations for his 2011 film Haywire.

While the business has been in the family for a few generations now the building itself has a much longer history. Much of the street developed into the layout we know today in the early 19th Century, the Flowing Tide pub the last building in the stretch at the corner of Marlborough Street being completed in 1824.  More than 100 years ago the building was owned by Corrigan and Wilson printers, their print-works were here and they leased out other floors to tenants such as a barber shop and a dressmakers.

The building was very badly damaged during the 1916 Rising with a sizeable claim of over £3,400 at the time being made for the almost total reconstruction of much of the building. Most of this work was completed towards the end of 1917. The building then became a bank branch for a number of years before in the mid 1920’s it became the booking offices of the famous Cunard shipping line. 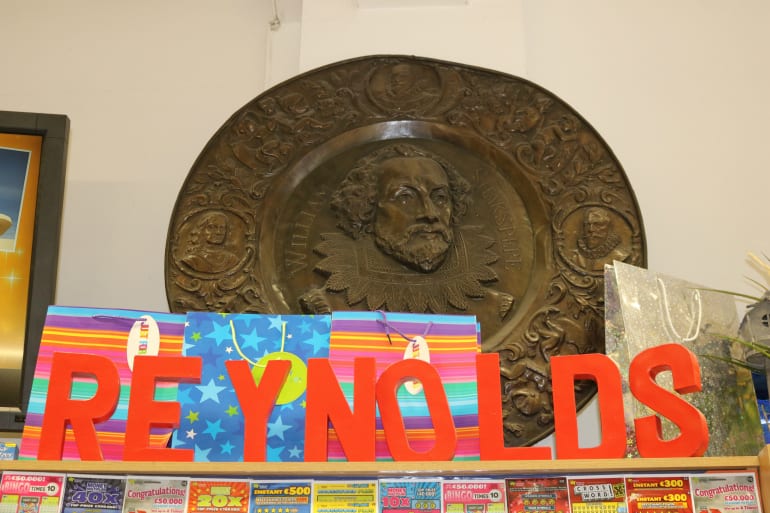 The Cunard line was world famous and exists to this day. The tragic ship the Lusitania, sunk off the coast of Cork during World War I was one of their most famous vessels and they were a by-word for luxury and style. In the 1930’s they merged with the White Star Line who had commissioned the Titanic and went on to launch such iconic ships as the Queen Elizabeth and later the QE2.

The building at 6 Lower Abbey Street was their main Dublin office where the great and the good would have bought tickets to Boston or New York or booked a cruise to the Norwegian fjords. The Cunard line offices were a fixture on Abbey Street until the late 50’s. In another nod to the past the present shop still sells tour tickets, though they are not for cruises to America rather for the many tour buses the operate from nearby O’Connell Street.

It was in the 1960’s that the shop and building came into the ownership of the Reynolds family and there it has remained. They feel that the building and the shop itself are now part of the fabric of the street and of the city and they have no plans to leave Abbey Street any time soon. Indeed there are early plans for improvements planned of the building and facade and ideas about how the upper floors could be put to new uses.

The last of the old trams ran in the city centre in 1949 with the Reynolds’ moving in a few years later. They were there when the trams returned with the Luas lines opening in 2004 and await the launch of the new Cross-City line later this year. The street remains a transport hub, busily funnelling people from the Luas lines and from Busáras and Connolly Station. For over 60 years a quirky and quintessentially Dublin shop has looked out on it all. 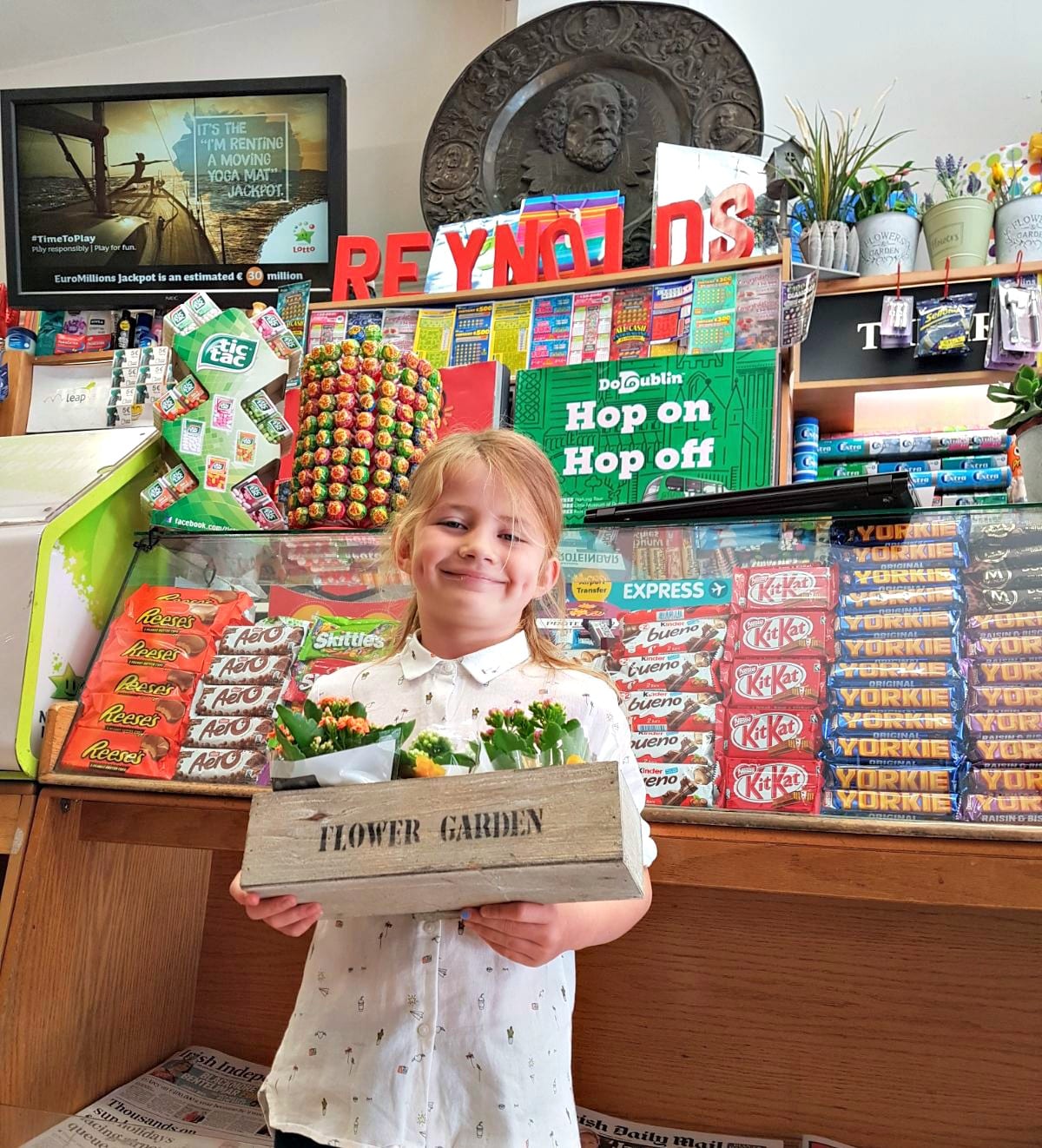 Where to eat on Capel Street!